It Is Raining Cats and Dogs

on January 30, 2013
As the rain falls in sheets of water outside my window, I was reminded of an email that had a lot of sayings we have formed through history.  This one seems appropriate for this day.

Where did the saying, "It's raining cats and dogs come from?" 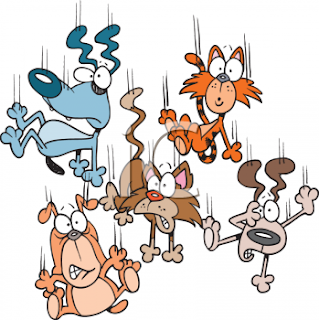 During the 1500's, houses had thatched roofs-thick straw-piled high, with no wood underneath. It was the only place for animals to get warm, so all the cats and other small animals (mice, bugs) lived in the roof. When it rained it became slippery and sometimes the animals would slip and fall off the roof. Hence the saying, "It's raining cats and dogs."

Now we are all smarter :)  What popular sayings do you know the history behind?
Humor

Ah, the smell of bacon and pancakes with Trot Nixon

While most were sleeping in on a Saturday morning, I had the opportunity to hear Trot Nixon share about his life and faith in Christ. I always knew that Trot was a GREAT individual, not only for his achievement but his heart and spirit. To hear him verbalize his faith and be able to say that he was empty inside even after winning the World Series with the Boston Red Sox was inspiring. To hear anyone proclaim that even the greatest experience is nothing unless it is filled with Christ just resonated with me this morning. If you wonder why, read my "Empty" Post. Brian Furtado and his Men's Ministry crew did an awesome job with this event. Our newly renovated fellowship hall was packed with people of all ages. One person even acknowledged becoming a Christian during Trot's invitation. I am so thankful to be a part of something on a Saturday morning that will make the difference in the lives of people for eternity. If you would like more information on the

I must say that I really enjoyed Transformers 2: Revenge of the Fallen . I was hoping for some great action and I was not disappointed. There were many transforming robots and great CGI fight scenes. They even used the whole "messiah" thing in the story line. I won't go into details in hopes of not spoiling anything. However, I was very disturbed by some comments that Megan Fox made to the press. She was asked what at first glance seemed to be a not so deep question. "If you could take Megatron to one side, have a coffee with him and talk him down from wrecking the entire world, what would you say? “God!” laughs Fox. “That’s a question I don’t have an answer for and I hate you for asking me that because I’m usually so prepared!”She considers. “I think I would make a deal with him and say instead of the entire planet, can you just take out all of the white trash, hillbilly, anti-gay, super bible-beating people in Middle America?” (source) (Clearing my thro